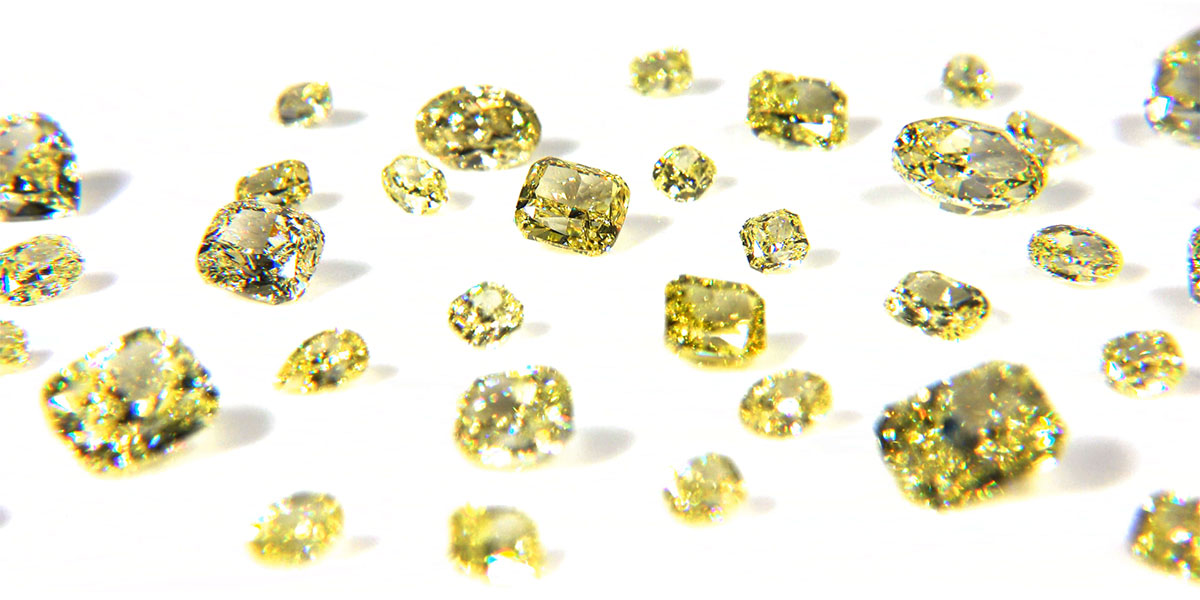 Since 2001 thousands of our clients have saved millions of dollars on their fancy colored diamond purchases.

Presenting a selection of GIA certified natural fancy colored diamonds that we have recently sold to clients around the world.

Fancy Yellow diamonds have a bright, robust yellow color and are the world's most valuable yellow gemstone. Many people consider yellow diamonds to be the most beautiful yellow gem because of their brightness, fire, and exceptional luster. Experts agree, no other gem shines quite like a diamond and yellow diamonds are a perfect example of how a gem can convey a bright, beautiful and incomperable canary yellow color while also showing a mesmerizing combination of Fire, Brilliance and Scintillation.

Natural fancy color diamonds are truly Earth's rarest gems and have been the coveted treasures of royalty since the dawn of recorded time, probably even before that.

In diamonds, rarity equals value. With diamonds in the normal range, value is based on the absence of color, because colorless diamonds are the rarest. With fancy color diamonds—the ones outside the normal color range—the rarest and most valuable colors are saturated pinks, blues, and greens. In all cases, even very slight color differences can have a big impact on value.

Compared to fancy yellows and browns, diamonds with a noticeable hint of any other hue are considerably more rare. Even in light tones and weak saturation, as long as they show color in the face-up position, they qualify as fancy colors. Red, green, and blue diamonds with medium to dark tones and moderate saturations are extremely rare.

Diamonds with red or reddish colors are extremely rare and highly valued. Pure pinks are more popular than diamonds that are purplish, orangy, brownish, or grayish. Trade professionals market some very attractive stones in this category as “rose-colored,” and some stones with purplish tints as “mauve” diamonds.

Blue diamonds are extremely rare. They generally have a slight hint of gray, so they’re rarely as highly saturated as blue sapphires. Their color is caused by the presence of boron impurities—the more boron, the deeper the blue.

Fancy green diamonds are typically light in tone and low in saturation. Their color often appears muted, with a grayish or brownish cast. The hue is generally in the yellowish green category. In most green diamonds, the hue is confined to the surface, and rarely extends through the entire stone. That’s why cutters try to leave as much of the natural rough around the girdle as possible.

Green diamonds get their color when radiation displaces carbon atoms from their normal positions in the crystal structure. This can happen naturally when diamond deposits lie near radioactive rocks, or artificially as a result of treatment by irradiation.

Brown is the most common fancy diamond color and also the earliest to be used in jewelry. Second-century Romans set brown diamonds in rings. In modern times, however, they took some time to become popular.

Brown diamonds were typically considered good only for industrial use until the 1980s, when abundant quantities of them began to appear in the production of the Argyle mines. The Australians fashioned them and set them in jewelry. They gave them names like “cognac” and “champagne.” The marketing worked, and brown diamonds are found in many medium-priced jewelry designs today.

Yellow is diamond’s second most common fancy color. Yellow diamonds are sometimes marketed as “canary.” While this isn’t a proper grading term, it’s commonly used in the trade to describe fancy yellow diamonds.

Until the late 1990s, there was not much demand for black diamonds. But designers started using them in jewelry, especially contrasted with tiny colorless diamonds in pavé settings, and they began to gain in popularity.

There are also gray diamonds. Most of them contain a high level of hydrogen as an impurity element, which probably causes their color.