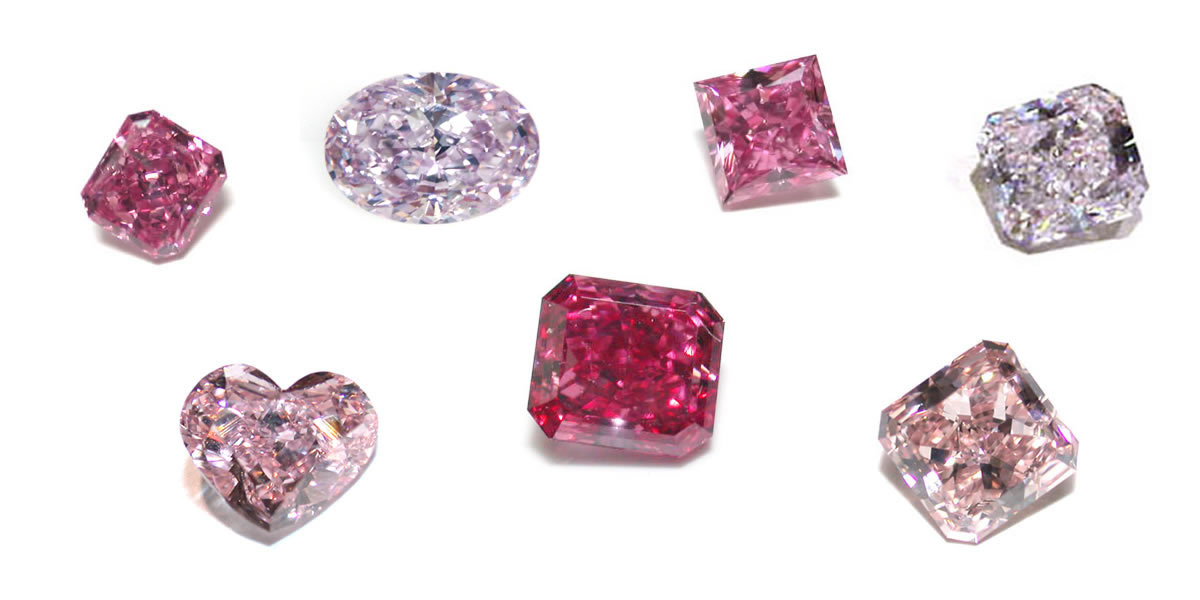 Natural pink diamonds are among both the rarest of all diamond colors as well as the most valuable.

Pink diamonds are availabile in a range of colors ranging from a delicate baby pink as you would find in a Fancy Light Pink or the delightful lavender of a Fancy Purplish Pink to the vibrant color of an Intense Pink or the incomperable Vivid Pink.

The Origin of Pink Diamonds

Pink diamonds occur naturally in all parts of the world including Africa, Russia, Canada, India and Australia. If you think that makes them common, think again.

In Western Australia, the Argyle Mine, the most famous pink diamond producing mine is located. This mine produces a large percentage of the world's pink diamonds anually.

It is owned by a company called Rio Tinto. At their headquarters, the rare diamonds are cut and polished and then sold through an exclusive tender by invitation auction.

Where Does Pink Diamond Color Come from?

The source of their pink color is greatly debated in the gemological world but it is most commonly attributed to enormous additional pressure that these diamonds undergo during their formation. With colored diamonds, you'll never find two stones that look exactly the same. With pink diamonds, you find they often come with a secondary hue , they can be described as purplish-pink or orangy-pink. Even though it is known how other colored diamonds get their color, there is only speculation about how pink diamonds get theirs. It is thought some deformation makes the structure of the diamond the color pink.

Pink Diamonds Are One of the Most Valuable Diamonds

Rio Tinto, the company that owns the Argyle Mine, says that one carat can cost from $100,000 up to $1 million. The price will depend on the color intensity, shape, clarity, and proportioning.

The secondary hue, for example, can make a big difference in the price. For example, a brownish-pink shade isless valuable than for a purplish-pink one.

The World’s Most Famous Pink Diamonds

The Martian Pink is a rare, 12 carat pink diamond that belonged to US jeweller Harry Winston, who sold it in in 1976, the same year that the US sent a satellite to Mars. The round brilliant-cut pink gemstone is mounted on an 18k gold, size 7 ring. It was bought in an auction held in Hong Kong in 2012, priced at $17.4 million.

The The Noor-ul-Ain Diamond, a 60-carat gem, was given to Empress Farah Diba in the form of a tiara when she married Mohammad Reza Shah Pahlavi, the last shah of Iran. The centrepiece of the tiara is the famous pink diamond

This extremely rare 15.38 carat, pear-shaped pink diamond, set in a simple ring, it is believed to be the most expensive vivid pink diamond to ever be sold on an auction at the time – where it was bought for $31.6 million. The colour of the diamond is meant to be quite vivid, according to David Bennett, a worldwide chairman of Sotheby’s International Jewellery. The diamond was sold in an auction at Sotheby’s in Geneva, in May, 2016.

The Pink Sunrise diamond is an intense pink-coloured gemstone that weighs 29.78 carats. It was made famous by the prestigious diamond cutter Gabi Tolkowsky, who cut the diamond into a modified heart-shape. It is believed to be internally flawless, and it is consider very rare. The existence of this diamonds was only revealed to the public at the beginning of the 21st Century.

The Pink Star, formerly known as the Steinmetz pink diamond, is a huge 59.60 carat, oval-shaped vivid pink diamond. It was cut and polished from a 132.5 carat rough diamond, mined from South Africa circa 1999. The Pink Star diamond currently holds impressive records, such as being the biggest pink fancy vivid diamond ever discovered as well as its price, being sold in an auction in Geneva in 2014 for $83 million! The lucky buyer was diamond-cutter Isaac Wolf, who bought it as an investment. It is also famous for being extraordinary in size and exceptionally rich in colour, surpassing all others known to exist in government, royal or private collections.

The previous name eludes to the diamond’s previous owner, The Steinmetz Group, who cut the stone into a mixed cut, featuring an oval shape with a brilliant cut pavilion. It took almost two years to complete. On May, 2003, the impressive gemstone was displayed to the public for the first time in a public ceremony in Monaco.

The Pink Star diamond was sold in March 2017 for over $72 million dollars.

The Graff Pink diamond falls in the top 1 to 2% of diamonds in terms of purity, according to the Gemological Institute of America. Its colour is exceptional and it features an emerald cut. This stone was previously owned by Harry Winston, a world renowned York jeweler who has possessed a number of famous diamonds. He kept it in his private collection for more than 60 years, when it was auctioned in 2010 in Geneva and purchased by Laurence Graff, a legendary diamond collector known as the “King of Bling.” He paid  $46.2 million, which, at the time, was the most expensive diamond in the world.

When Graff decided to buy it, he had plans to make it even more valuable than it was. Using cutting-edge technology, experts were able to eliminate potential defects considered as flaws, such as blemishes. Graff also planned to intensify the colour of the diamond, which can be achieved through cut.

Let us know what type of pink diamond you have in mind. Please be as specific as possible in regards to your desired carat weight, color intensity and budget using the form below. An IceStore Diamond Specialist will contact you within one business day to discuss.